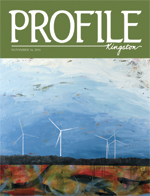 An excerpt from the November 2016 issue of Profile Kingston:

Since returning a decade ago to Kingston, her hometown, Susanne Langlois has been reclaiming her old community and enjoying her extended family. A painter, she is also becoming increasingly ensconced in Kingston’s diverse, dynamic art scene. Described by a childhood friend as “kind, patient and gentle,” Susanne is rather private, yet she delights in being genuinely involved with her expanding community.

Born and raised here, she is the youngest of four children. Her father, Adrien, from a Franco-Ontarian area of northern Ontario, came to Queen’s University to study physical education; there he met his wife, Terry, who was studying education. Adrien became a much-loved physical education teacher at KCVI, and Terry taught English as a Second Language, worked as a guidance counsellor and later was a private counsellor. The “very close” family lived in Calvin Park. They spoke English, but when Susanne was in Grade 4, they “took a sabbatical to Quebec City.” The older children went to school in English, but she went to a French school, and, she says, “by Christmas I was bilingual.” The children attended KCVI for high school. . .